Let us start, of course, by paying tribute to Alan Turing, because this singular man contributed in a decisive way to the development of the concept of “computer”: no epistemological discourse on digital technology and artificial intelligence can disregard his works. However, if he was unique, he was not alone: Alan Turing belongs to a line of many other prominent actors as Hilbert, Russell, Gödel, Shannon, von Neumann, Ulam … There is not really something like a “before” and an “after” Turing: it contributed to a continuous technical and scientific progress propelled by two world wars. In other words, the “computer artifact” did not need Turing alone to see the light of day, but it was he who first envisioned it mathematically.

It is also necessary, now, to make the effort of a double “decommitment”: that of myth and that of guilt. Alan Turing broke the code for Enigma, the Nazi encryption machine, and contributed to the Allied victory in World War II. Without him, the war would have lasted two more years … Despite this feat, being notoriously homosexual, he was condemned in 1952 to chemical castration and committed suicide two years later by crunching a poisoned apple (it is nevertheless not sure that there is a link between his conviction and this suicide). He was thus, for 60 years, a bad conscience of England. It was not until 1983 and the biography of Andrew Hodges1 that the history of Turing began to be known beyond scientific circles. National “psychotherapy” ended on December 24, 2013 with a “Royal Pardon”. The circle is complete with the unveiling of Turing to the general public by the film “The Imitation Game“, released in 2015. Alan Turing now belongs to national history of Great Britain.

This historical tale does not give thanks, at least to a large audience, to its essential contributions, although tinged with ambiguity, to the philosophies of mind in the era of “computing”. However, these contributions were essentially constituted before the Second World War, before the events which established Turing as a myth. What is it about?

Alan Turing’s father was a civil servant in the British colonial administration in India. His wife, Sara, returned to England to give birth to Alan in June 1912. She spent a year with her son and then returned to India. Alan spent his childhood in an adoptive family with John, his older brother, who simply declared:

Rightly or wrongly, our father decided that he and my mother should return to India alone, leaving their two children in England with adoptive parents. Alan and I were entrusted to the “Wards” – we would always call them the “Wards”.

Alan and John, raised by the “Wards” in comfort but almost like orphans, will see their parents when they return regularly to England. On one occasion, in the summer of 1921, his mother found Alan deeply changed2: “While he had always been very lively, almost agitated, becoming friends with everyone, he had become associable and dreamy” In 1922, she and her husband leaving for India, “will keep the painful memory of Alan running behind their taxi in the school aisle, arms wide open”. Alan was not unhappy but, like any child faced with this kind of abandonment, will have to develop stratagems

The school which Alan ran down the aisle was called Hazelhurst. Start here, for this child who has become “dreamy” and “associable”, years of bullying and mocking. The school principal regarded him as “the kind of boy who is bound to be a problem for any school or community, being, in some ways, anti-social”. He seems untidy, neglected, unsuitable and finds refuge in the sciences and the observation of nature. 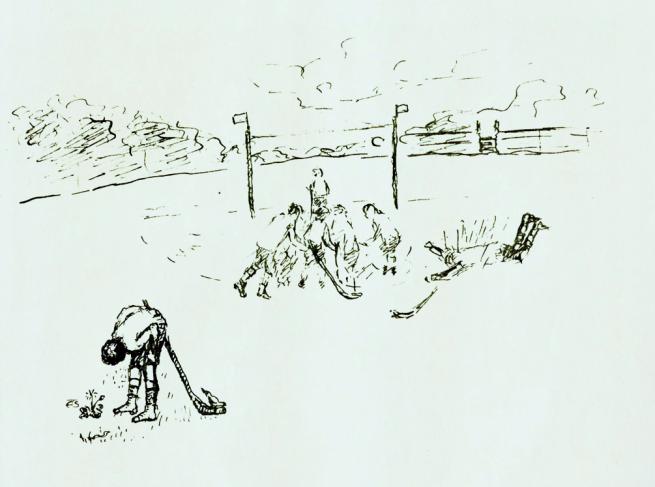 Turing, drawn by a comrade in 1920, is more interested in flowers than in hockey.

In 1926, Alan joined Sherborne, a public school. The start of the school year coincides with a general strike which paralyzes the transportation networks. He decides to cycle the 90 kilometers that separate his home from his new school, a feat reported by local newspapers: Alan’s body turns out to be sporty and daring. At Sherborne, he continues, so to speak, his momentum: he shows a pronounced taste and real gifts for the sciences. However, its academic performance, particularly in non-scientific subjects, and its particularities are moderately appreciated. So, he was reminded what was expected of him3 :

If he wants to stay here, he must aim to educate himself. If he only wants to become a science specialist, he wastes his time in a public school. […] He apparently spends a lot of time investigating advanced mathematics and neglects basic work, essential in all matters. His job is dirty.

But he persevered, alone. 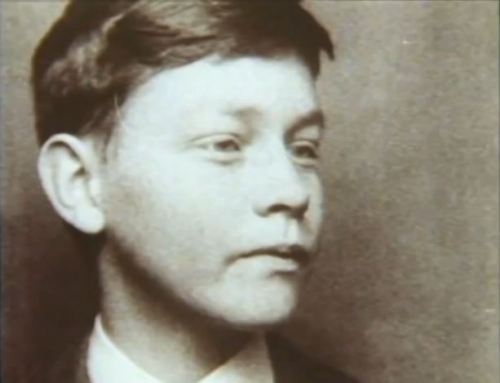 In 1928, he was admitted to the scientific section at Sherborne and then made the decisive encounter with Christopher Morcom, a student of the upper class. For the first time, he finds an alter ego, an interlocutor. The two boys are driven by the same passion for science, which they discuss night and day. Alan develops a real admiration, probably tinged with romantic feelings, for his friend, who channels his passion and transmits to him his taste for detail and method. But Christopher died suddenly in February 1930. Then, Alan began his trajectory as an adult person, for which his intellectual and emotional solitude had already prepared him. This trajectory begins with a terrible mourning, carried out by an autonomous spirit in an energetic body..

Alan Turing is going through a long and painful period of reflection, during which he is sustained by the idea that he must, in one way or another, continue the “work” of his friend. For at least three years, if we believe Christopher’s mother, he is concerned by the question of how the mind is “engraved” in matter, and if it can somehow “survive” at the disappearance of the body. It is obvious that, if the body of Christopher has disappeared, his spirit is still strongly present for Alan and for his close relations. There is therefore obviously, for the mind, a mode of existence that persists. But which one? Can we capture it?

In 1932, Alan Turing wrote to Christopher’s mother a short manuscript essay, entitled “Nature of Spirit”, in which he gave her the outcomes of his reflections. Here is the very strange end, which deserves a quote in full:

Personally, I think that spirit is really eternally connected with matter but certainly not always by the same kind of body. I did believe it possible for a spirit at death to go to a universe entirely separate from our own, but I now consider that matter & spirit are so connected that this would be a contradiction in terms. It is possible however but unlikely that such universes may exist.

Then as regards the actual connection between spirit and body I consider that the body by reason of being a living body can “attract” and hold on to a “spirit” whilst the body is alive and awake and the two are firmly connected. When the body is asleep I cannot guess what happens but when the body dies the “mechanism” of the body, holding the spirit, is gone and the spirit finds a new body sooner or later perhaps immediately.

As regards the question of why we have bodies at all; why we do not or cannot live free as spirits and communicate as such, we probably could do so but there would be nothing whatever to do. The body provides something for the spirit to look after and use.

This strange text, written at 19, marks the first stage of her mourning. He reveals an internal conflict that will never leave him: the logic of the mathematician fails to resolve the desire of the man (to revive his friend). Turing seems to be seized with an emotion comparable to that expressed by Carlo Goldoni, 150 years earlier, while he was fighting against his “moods”4 :

Our mind clings so tightly to our body that, without the reason that is the sharing of the immortal soul, we would only be machines.

The immortal soul is precisely what escapes all mechanization. It’s the non-mathematical part of Christopher, in a way. But the power of desire will continue to animate all of its scientific work. As expressed by the French philosopher Jean Lassègue in a recent program5 :

In 1931, Alan Turing entered King’s College, a much more liberal environment than Sherborne, in which his mathematical talent began to fully flourish. His work culminated in 1936 with the publication of the article in which he described his famous “machine”6. This machine, moreover very simple, is in principle capable of calculating anything, exactly in the sense that the computer is capable of executing any imaginable program: the body / mechanism of the machine is somehow capable of welcome any “spirit” as long as it is “calculable”. But the strangest thing is that it is a work of a mathematician, who solves with a very unusual method (the plan of a machine) a fundamental theoretical problem exposed by David Hilbert in 1900 (and solved by Gödel by other means in 1931). Here is a short extract from Turing’s article:

Computing is normally done by writing certain symbols on paper. We may suppose this paper is divided into squares like a child’s arithmetic book. […] The behaviour of the computer at any moment is determined by the symbols which he is observing, and his ” state of mind ” at that moment. We may suppose that there is a bound B to the number of symbols or squares which the computer can observe at one moment. If he wishes to observe more, he must use successive observation.

The Italian mathematician Giuseppe Longo comments on this curious way of doing things, of personifying this machine5 :

We know many other scientists who have involved their “bodies” in their research effort. We thus remember Einstein, also a great subject of discussion between Alan and Christopher, who suggested that we travel with him in a train, a space elevator, or on a ray of light…

One has to wonder if the mind, intelligence, or reason are not only intended to solve problems of the body (there would then be as many possible forms of intelligence as there are achievable bodies). Turing’s body problem, so to speak, is the lack of Christopher. His machine, our computer, does not solve it but presented itself as a possibility which he examined as a mathematician.

Our bodies are crossed by lack and desire. This is why sometimes, perhaps out of weariness, we are ready, like Alan Turing, to believe in our machine and in their ability to fill our gaps. But however much we seek, we will conclude sooner or later like him: the immortal soul is elsewhere.