This is a subject that is a priori not very exciting: submarine cables. However, we raise an eyelid when we know that 99% of intercontinental digital traffic (data, telephone, internet, etc.) passes through the almost 300 (known) cables that mesh the globe. We then wake up frankly by guessing the enormous geostrategic stakes hidden behind this planetary piping. And nothing like a good artistic vision like that of Trevor Paglen to finish awakening.

“Geography” of the Digital

To predict the long-term future of a system, one must understand what its material is made of and by what physical laws it is transformed. With regard to human development, for example, the span of the “long term” is the generation and the “physics” of the system is biological, demographic and geo-ecological (culture, politics, etc. are in general are not very predictive).

It’s a bit the same for the digital world. Contrary to what we might be led to believe, its long-term future is not to be sought at the level of service superstructures (GAFAM, to simplify). The digital world has its own “post-human” development logic. It is therefore available to a long-term explanatory “physics”. And it is that of a network infrastructure: it is technological and geographical (topological if you will). And it is no coincidence that Trevor Paglen, whose work will be mentioned at the end of the article, obtained a doctorate in geography at Berkeley in 2008.

We can see, in the distance, the ship that deployed it on the ocean floor. Its installation always ends more or less like this: towed on a beach, buried, then connected to a “landing station”. The heart of an optical cable, the “fiber”, is made of silica (glass) and has the diameter of a hair (to find out all about these cables, we suggest following the very interesting conference – in French – by Bruno Vinouze1).

Technical progress essentially consists in making more in less time, less space, and with less resources. The light signal (in the near infrared, invisible) travels the fiber at the speed of 200,000 km per second while in the void it springs at 300,000 km / s. There remains therefore, on this side, a great margin of progress. But also, why bother to make a cable several thousand kilometers long, tow it at sea, sometimes bury it, build a landing station etc. when a geostationary satellite reached at a speed of 300,000 km / s could do the trick? First, of course, because it remains cheaper. But above all…

Let’s follow one of the many cables that cross the Atlantic Ocean from New York to London. The distance, about 5,000 kilometers, is traveled by the optical signal at the speed of 200,000 km / s in 25 milliseconds. With a geostationary satellite located 36,000 km from Earth, an optical signal from London to New York travels approximately 72,000 km at an unmatched speed of 300,000 km / s. But it takes 240 milliseconds. These are “only” 2 tenths of a second more, but at a time when computers can carry out thousands of billions of operations per second, at the time of high frequency trading, this gap is abysmal.

For this very simple reason, the satellite is bound to remain marginal. We need a mesh close to the earth’s surface. If we could go straight through the center of the earth, it would be even better.

Widemouth Bay and the City

Most of the transatlantic cables leave from New York and land in England, somewhere around Bude, at Widemouth Bay, Cornwall2. London is about 300 kilometers as the crow flies, which is just over 1 thousandth of a second in fiber. It’s not for nothing that the City is … in London (and Wall Street in New York). The European Central Bank has studied in detail and in graphs the benefits of having a landing point on its territory (we underline):

Optical submarine cables bring a competitive advantage to financial centers located near the oceans, such as Singapore, because they are directly connected to the Internet, to the detriment of terrestrial cities like Zürich. Cable connections are estimated to have contributed to the growth of turnover in London, the world’s largest trading center, by around a third. […] The advantage of optical cables in the UK as a financial center, combined with institutional inertia, suggests that if trading activity relocates after Brexit, it will only be very gradually.

We retain at least this: the landing points set an economic and financial environment that is quite difficult to move. The City is just one example. These points also determine, for example, the location of the data centers (and vice versa). So, it should come as no surprise that the States facilitate their landing on their territory, as close as possible to their economic centers.

From Bilbao to Virginia Beach

A cable costs around $ 1 billion. It is mostly financed by telecommunications operators according to a fairly simple rule: an operator that finances 20% of the cable benefits from 20% of its capacity. So, let’s follow the money and leave from Widemouth Bay to Bilbao in Spain (following a cable belonging to the Indian Tata Communications …).

Not far from Bilbao, there is the landing point of a new cable commissioned last September, called “Marea”, which achieves a record speed of 160 terabits per second, the equivalent of 71 million high definition video streams simultaneous. Marea was funded by Telefonica, the Spanish operator, and … Microsoft and Facebook. Why them? The first explanation was given by Microsoft. When Hurricane Sandy devastated the east coast of the United States in 2012, it left a real mess. Frank Rey, Director at Microsoft, was at home. He could not let his relatives, then in Europe, know that he was safe3:

The entire network between North America and Europe was isolated for a number of hours. For us, the storm brought to light a potential challenge in the consolidation of transatlantic cables that all landed in New York and New Jersey.

Having found that the leaders of Facebook were launched in the same reflection (we may have searched, Facebook seems not very talkative about Marea), they designed and financed together a cable passing further south from the coast of Virginia, where 4 of Microsoft’s Azure datacenters are located, to land in Spain on a beach in the Basque city of Sopela, near Bilbao.

We can easily guess the second motivation: GAFAM can no longer afford to depend on traditional operators and submit to the requirements of net neutrality (they may well defend it for others when they have their own networks). They are now very involved in the construction of their own underwater infrastructure, whether it be Google with its fourth cable connecting the United States to Japan and installed in collaboration with China (the cable has its reasons that politics ignore …), Amazon with its first transpacific cable, or Apple which seems to want to catch up.

It is there, in this “geography” of the digital network, that we can try to predict the future and engage in political reflection. This future belongs to those, known and unknown, who own and control infrastructures, for example cables, landing sites, etc. Want a “proof”?

As the United States and Russia have been clashing over Ukraine for quite some time, tension suddenly rises in September 2015. Russia is strengthening its military presence in Syria to increase support for the ruling regime. It is hard to imagine the tension between the two countries at that time. The New York Times reveals the following episode in October 20154 :

Last month, the Russian spy ship Yantar, equipped with two autonomous submarines, cruised slowly off the east coast of the United States on its way to Cuba, where a major cable landed near the American naval base at Guantánamo Bay. He was constantly watched by American spy satellites, ships and planes. Navy officials say Yantar and its underwater vehicles have the ability to cut cables several kilometers deep.

Cables can sometimes be damaged or cut by trawls from fishing vessels, but these incidents generally occur near the coast and the cables are repaired within a few hours. The Americans seemed more worried this time: repairing a cable on the high seas several kilometers deep is much longer and more complicated.

So important are undersea cables that the Department of Homeland Security lists their landing areas — mostly around New York, Miami and Los Angeles — at the top of its list of “critical infrastructure”.

And what about France? It is worries, but today seems more concerned about startups, AI, etc. only rather than mastering vital infrastructures, especially maritime ones. The French newspaper “Le Télégramme de Brest” (Brest is a famous French military harbor) nevertheless published a short article on this subject in December 20155 :

MP Patricia Adam, President of the Defense Committee of the National Assembly, has been struggling since last July to obtain from the government the classification of Orange Marine (subsidiary of Orange) as “operator of vital importance” . This classification would avoid foreign capture (entry into capital) of an industrial activity of strategic interest. The request is pending. Defense Minister Jean-Yves Le Drian supported the process.

And today? Mystery for us, anyway …

For submarine cables to interest art, it took an extraordinary event: the Snowden affair. His revelations have uncovered a technical element that now seems fairly obvious: 80% of the world’s internet traffic flows through fibers the diameter of a hair. It therefore seems entirely logical for an intelligence agency like the NSA to tie up its “alligator clips” there, in or near a landing center. This is known in English as “tapping”, i.e. listening.

The artist (and geographer) Trevor Paglen took up the subject and offered us a kind of performance in December 2015: diving with him off Miami to follow a cable. In other words, seeing and touching, in concrete terms, what global internet traffic means and how physically easy it is to reach it. Journalist Brian Boucher offered himself this small aquatic event for $ 500 and tells6 :

“When we talk about ‘the Internet,’ we talk in abstract terms like ‘the cloud’ and ‘cyberspace,’” Paglen says to the group, all in wet suits, before we strap on our air tanks. The Internet is not just in the air, he says, but rather travels along the cables we’re headed to see. […] [ This ] trip was about letting us divers get up close and personal to this signifier of power and control, in a form of consciousness-raising.

Most of the time, we understand the world through images. It seems to me that this is what good art has to do: teach you how to look at the historic moment you are going through.

Or with Megan O’Grady from the New York Times:

People like to say that my job is to make the invisible visible, but it’s a misunderstanding. It’s more about showing what the invisible looks like. 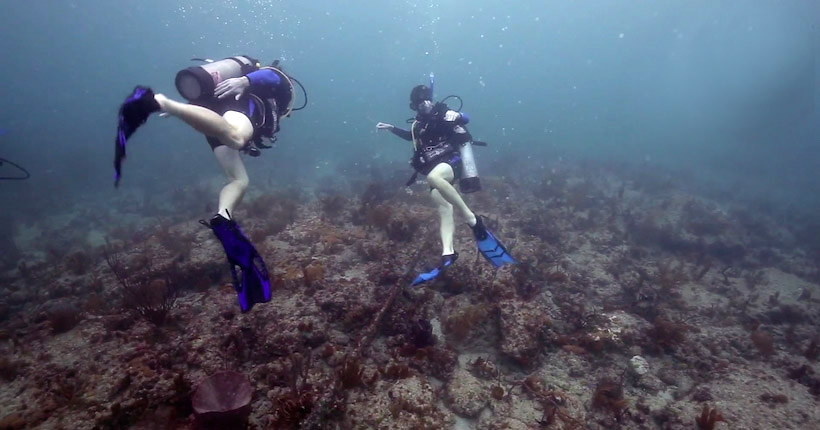 Seeing, touching, engaging your body in understanding the digital world is the only properly human way to appropriate it. We need to imagine the future and this faculty does not go through reason but through the body. Maybe this should be part of our digital education: diving, seeing, touching; the manufacture of a cable, a datacenter, measure, quantify, take a course in digital geography, even classical geography… Let’s follow the artists who offer us sensory experiences of these infrastructures, those who unleash our imagination. The landing station is a good starting point: put on a dive suit and follow the cables!