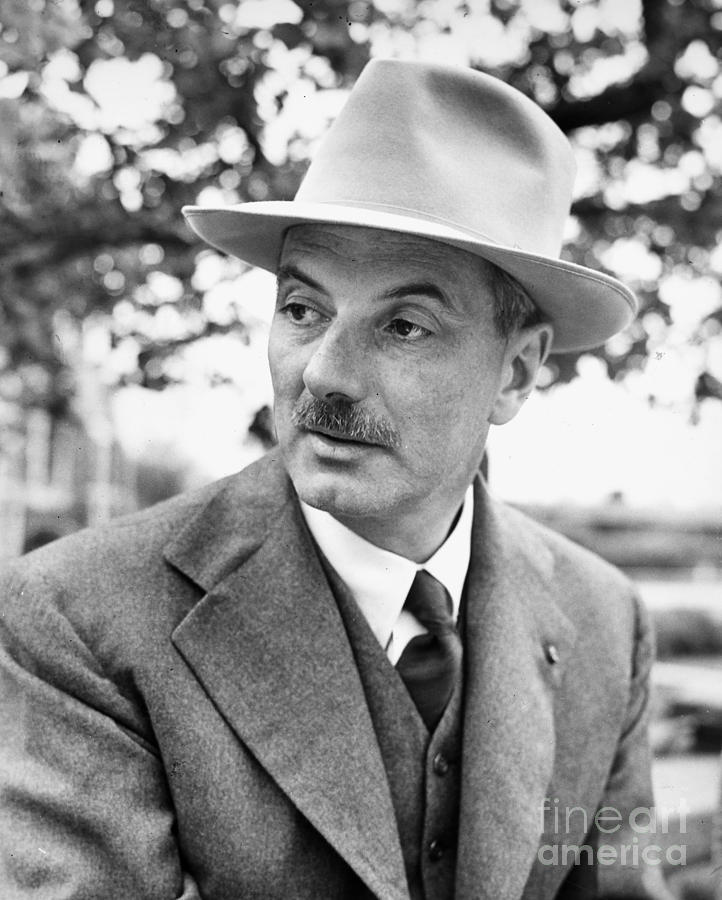 Lewis Mumford, philosopher and historian of sciences, virulent pacifist, coined in the 1960s the term “Megamachine” to designate vertical and authoritarian organizations, “complex human machines” which emerged almost five thousand years ago in Mesopotamia (he is also one of the inspirers of Jacques Ellul). The following quote gives the flavor of his opinions1 : « The danger [for democracy] comes from the fact that, since Francis Bacon and Galileo defined the new goals and methods of technique, our great physical transformations have been accomplished by a system which deliberately eliminates the entire human personality, does not take into any account the historical process, exaggerates the role of abstract intelligence, and makes the domination of physical nature, and ultimately of man himself, the main goal of existence ».

It is not surprising that the Megamachine, to which we would be subject today, has become for some a flag in the fight against progress. Wrongly in our opinion. But, having returned to this concept, we will meditate on another analogy with the Mesopotamian civilizations which signs a form of return to what we could call in echo their “Megasystem”.

Károly Simonyi was a Hungarian physicist (also father of Charles Simonyi, brilliant developer at the origins of the famous Microsoft Office suite) known for his work “A cultural history of physics” and in which he wrote about the Mesopotamians:

If we consider that it was necessary to handle blocks of stone of around fifty tons […] it would be improbable that the foremen directing the operations did not develop concepts such as friction, torsion or the vector sum of strengths. It is not surprising that Lewis Mumford, in his work “The Myth of the Machine”, saw in these organized forms of collective work the prototypes of modern complex machines. In fact, these are machines, in the strict sense, because the function of the individual has been reduced to that of a component: the transmission devices, the gears, the hinges, the control mechanisms have been replaced by bones and muscles. The regulators of this huge machine are the whips of the foremen. The term “Megamachine” is quite apt, because tasks of similar intensity and complexity could only be performed today by machines from the 20th century.

A Megamachine is thus a complex machine whose purpose is defined but “mega”, a “mega-purpose”: move a huge block of stone, build a vast irrigation system, build a tower of Babel … and therefore articulate a large quantity of men with some available techniques. Today: build a gigantic social network, deliver anything in less than an hour, deploy colonies on Mars, send us in a tube at 1100 km / h… Man, fed by mega-ambitions, needs Megamachines to achieve them and it is clear that in some respects we animate them: today, these Megamachines are our companies.

Beyond companies, is modern society as a whole (well, the urbanized part of humanity), embedded in the digital world, a Megamachine and should we be indignant? Yes, if we believe some. Let us follow, for example, Serge Latouche, for whom our society is just a “hellish” Megamachine. First, it would escape any regulation2:

The political authorities of the largest industrial nation-states are now in the situation of former provincial sub-prefects: all powerful against their citizens in the finicky execution of oppressive regulations, but totally subject to orders and closely dependent on the central and hierarchical power, revocable “ad nutum”, at any time. Simply, this central power of Big Brother has become completely anonymous and faceless.

But we do not see any worldwide “Big Brother” at work, nor by whom or by what he would be embodied, and the largest “industrial nation-states”, far from being “sub-prefectures”, are indeed leading the situation. Think for example of China, which tightly controls its digital society … The idea of a Megamachine overlooking everything else is a delusion, at best a transitional category.

Then, according to Serge Latouche, the Megamachine would lead us to an “ecological dead end“, by demanding ever more “blind” and “delusional” progress:

This headlong rush, necessary for the dynamic equilibrium of the system, comes up against the relative finitude of the world.

This is “physically” correct, but only all things remaining the same elsewhere, that is to say, without any major technical progress, for example in agriculture or in energy production and management. The ecological problem is serious but the danger lies above all in the disturbance of the global ecological dynamic (the disaggregation of “concrete” natural systems, their replacement by largely suboptimal “abstract” systems, to use the terminology of the philosopher Georges Simondon) rather that in the depletion of resources, repeatedly announced in the past.

Finally, the Megamachine would be “unfair” because it “standardizes, uproots and ultimately destroys politics“:

Programmed to achieve the greatest happiness for the most of the people, it is poised to lead to the misfortune of most, if not all, after having scandalously favored the well-being of a few.

Here we find the spirit of the theses developed by Mumford. But there is no “program”, no general intention, only a system that mechanically increases inequalities. The concept of Mumford is often used as follows: the Megamachine is responsible for all our ills and determines an apocalyptic future. But there is nothing like a global Megamachine: all the fights claiming to reveal and neutralize it are ineffective. The concept of “Technological System” (Jacques Ellul and the Technological System) seems to us to be more appropriate: it is not “hellish” because it wants nothing and determines nothing. Fighting it makes no sense.

There remains, however, what one could call, for lack of anything better, a “general atmosphere”. Let us try to characterize it by returning once more to Babylon.

Mesopotamian (“Sumero-Akadian”) civilization is fascinating in that it is the first to be deployed, for almost three millennia, thanks to writing and a representation of a world fully invested and controlled by the gods. Thus, the Babylonians practiced the divinatory art, founded on the principle that the gods left regular signs indicating the resolution to come, the epilogue of certain situations. The historian James Ritter offers two examples3, two pre-Babylonian texts whose structure is typical of divinatory logics.

In the first text, it is a question of studying the configurations taken by a drop of oil poured into water. This text takes the form of an “algorithm” associating with each configuration (protasis) the proposed divination (apodosis). Each sentence thus begins with “If the oil …”, continues with the observed configuration (“… is divided into two parts …”) and ends with divination (“… the man will die”). The second text is just as systematic. Each sentence begins with “If a man …” and continues in the form of a structure similar to that of the previous example (“… his way of looking is oblique / he will die of constriction”).

One can think that, because of its systematicity, this way of thinking is archetypical for (pre) Babylonians and thus applies to all of the “linguized” and mastered areas in conscious thought: medicine, mathematics, etc. In this scheme, two principles are at work: the combinatorial exhaustion of all possible cases and the absence of induction, of drawing up general rules then applicable, deductively, to particular cases. The only causative causes are of divine origin since the signs (“the oil is divided into two parts”) are left by the gods. Thus, the world is the scene of a vast system of signs to be tirelessly listed and deciphered, in a “manic” way.

Any law of nature thus comes under a kind of divine jurisprudence. 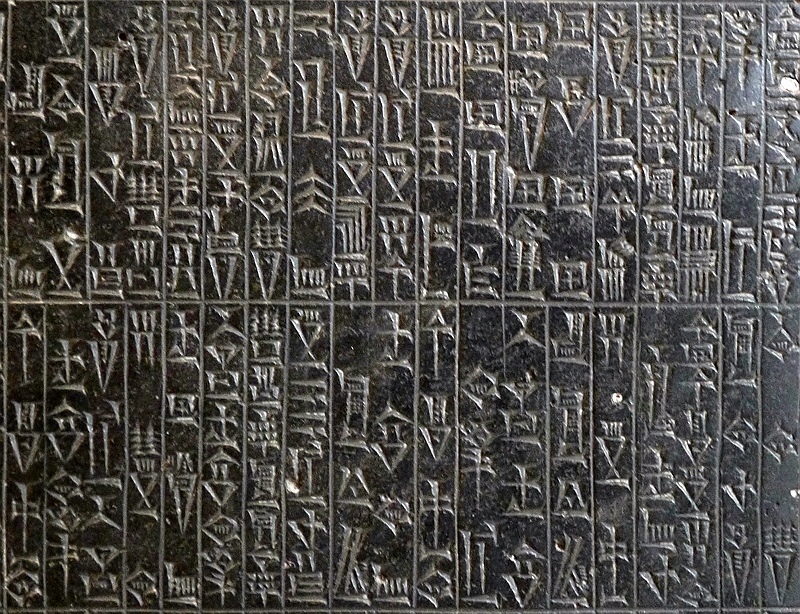 The “code” attributed to the famous King Hammurabi (and engraved on a stele over two meters high visible in the Louvre museum) follows the same pattern. It consists of a list of laws, decisions probably taken by the king (himself of divine essence), in all areas of society: status of women, family, agricultural economy, property of slaves, etc. Thus:

This precise, systematic, exhaustive aspect, engraved in writing, eventually agglomerates everything, the signs respond to the other signs and all acquire the strength of a global system and principles of action. This is what our algorithmic fabric looks like.

Many of these algorithms are part of the composition of our current Megamachines (the Amazon “machine”, the Ariane rocket, the “intelligent” building, Hyperloop, etc.), but most of them now respond to each other and form a system with no definite purpose. This phenomenon is amplified by AI algorithms which work on the protasis / apodosis model in a quasi-magic way (unexplainable in the literal sense) and tend to enclose our environment and our daily life in a massive net of modern omens. So, one of the most important modern omens is the “omen of buying” and we are already drifting towards “omens of behavior” (predictive marketing) and why not, tomorrow, the “omen of crime”4?

An aspect of our time

In nearly three millennia, the Mesopotamians have developed a truly prodigious society, culminating in splendid architectural and agrarian achievements, systems of trade and an elaborate social organization. However, their science was never really constituted because their entire system rested on a “causing” presence of the gods in the fabric of reality. The Greeks had to “put back the gods in heaven”, so to speak, so that the world here on earth could have its own causes and we had a science to study their regularities.

It seems to us that the return of a form of reality without proper causes, woven by enigmatic algorithms, can characterize the era in which we are entering, which Frédéric Patras thus expresses (we underline):

Any science can degenerate, whether in its exercise or its teaching, and the corresponding degeneracies are largely linked to the very essence of the domain considered. Thus, the legal disciplines or the natural sciences are subject to the risk of calling for more memory than reason, with the same risks that this entails for the exercise of justice, when jurisprudence replaces the normative and parliamentary development of law.

The massive presence of algorithms based on huge data memories is likely to lead to forms of technoscience where reason, induction and the production of symbols (Liu Hui overcomes a monster) disappear from our skills in favor of a giant and ultimately quite sterilizing associative mechanism. This mechanism will not be analyzed and engraved on a few tens of thousands of clay tablets, but carried out in a mega-system of “intelligent” and interconnected objects and algorithms which are as many causes that escape us.