In a short article1, Karine Chemla, sinologist and specialist in the history of mathematics, relates to the subject of irrational numbers2 a very enlightening episode from China in the 3rd century which is worth a detour. Certain passages of this post are a little mathematical but we think that non-mathematicians will be able to commit a little and access our final proposal: the three “statutes” of the Number and the brief opening that follows.

Liu Hui was a 3rd century Chinese mathematician, known among other things for having published in 263 AD. A commentary on the famous Chinese book “The Nine Chapters on Mathematical Art“3. This book is more a compilation of practical algorithms, used to solve various concrete problems (architecture, commerce, taxes …), than a treatise on abstract mathematics. No one really knows where this algorithmic knowledge comes from. Historians seem to agree, however, that they were developed independently of Greek mathematics.

Liu Hui notably presents an algorithm which makes it possible to deduce the side x of a cube from the diameter d of the sphere in which it is inscribed (this sphere is the smallest which contains the cube):

If we multiply the diameter d of the sphere by itself and divide the result by 3, and then extract the square root of this, this gives the side x of the cube inscribed in the sphere.

This relation between x and d corresponds to the formula that we would write in the mathematical language of today x2 = d2 / 3. Liu Hui uses this relation to try to calculate the diameter d of the sphere in which is inscribed a cube of side x = 5. The previous formula gives

By extracting the square root of the large hypotenuse, you don’t get through it4.

Let’s say for simplicity that the calculation of

does not fall right. Like an endless division, this (irrational) number is written with an infinity of numbers after the decimal point. Liu Hui nevertheless wants to continue his calculation to get the volume of the circumscribed cube (the smallest cube containing the sphere). The side of this cube is equal to the diameter d of the sphere and therefore its volume is worth d3. It was at this point in the story told by Karine Chemla that Liu Hui made a conceptual leap emblematic of mathematical thought, and of thought in general.

The extraction of the square root (the effective calculation of

) is a process, an algorithm, which acts on a number (75) to produce another number: the sought result (our calculator gives the approximate result

but it too will never “finish” this calculation).

as a latent number, or a potential number, and continues his calculation with this sign rather than 8.660254… incomplete and therefore inaccurate. It is possible that the sensitive figure of the segment to which this potential number corresponds, the great hypotenuse, calls on Liu Hui to grant to his measure,

, the status of a completed number, a number in action, exact and legitimate as an element of a calculation. As Karine Chemla relates (we underline):

Confronted with the impossibility of extracting the root of a number according to an algorithm, Liu Hui still gives a result to the operation. But this one is different in nature from what a calculation would have given. We refer to it, not by stating it explicitly, but by giving it a name, more precisely by giving the name of “root” to the number on which we operate. It will be “root of”.

The integration of the name (irrational number)

in the mathematical language is not yet the integration of a new type of number, conceptualized and theorized. Rather, it is a question of postponing the execution of the algorithm for an indefinite period and of considering the algorithm itself assigned to an “input” and, completed or not, as a mathematical object. Thus, the “monster”, this never completed number, remains locked in the name of the algorithm and does not obstruct the rest of the calculation.

Indeed, Liu Hui, having accomplished this conceptual leap, can continue:

], we obtain the root of chi as volume of the cube circumscribed.

Indeed, the volume of the circumscribed cube is worth d3, as it was said above, that is

The actual calculation may be postponed indefinitely; this name of the result is that of a perfectly exact value. As Liu Hui himself says:

We cannot determine the value of this quantity, that is why it is only by giving it the name of root that we do not make a mistake.

Liu Hui may not have perceived the irrationality of the number

. In any case, there appeared to him a calculation which produced endless numbers (after the decimal point in our writing system). He himself makes the parallel with rational fractions, whose effective calculation can also never stop:

By comparison, it’s like when, dividing 10 by 3, we consider its remainder as a third; we can then find the number.

We can indeed write 10/3 = 1 + 1/3. The name “a third”, that is 1/3, potentiates the calculation and maintains in itself the infinite writing of the number it designates , that is 0.3333… It is at the same time exact in the sense where the applicable syntactic rules build programs or algorithms (symbolic writings) which “span” the calculations. Fortunately, there is no need to calculate 1/3 = 0.3333… to obtain this exact equality, which is quite disturbing in the end:

The three “statutes” of the Number

, proposes to step over the impossible calculation of the intermediate results (which “we do not get through”) to consider only the syntactic game leading to the exact solution

“) to be applied to a number (421875). This “trick” is emblematic of the conceptual leap made by mathematicians when unrepresentable mathematical “monsters” appeared: a symbol (algorithm) is assigned to them, in which they remain confined, and which allows their manipulation in an abstract language.

This consideration opens the possibility of a triple “status” of the Number. First of all, Number as a sensitive, pre-mathematical shape: a quantity in the perceived world, obeying physical regularities. Then, Number as a procedure, one could say, that exists only mathematically and obeys syntactic rules reflecting its regularities as a shape. Finally, the Number as a written sign, as “money” in a way, tool of transactions in the real world and which therefore requires a translation respecting a convention of signs (a base).

Let us remember for example the shape allowing to understand the procedure of the square root: 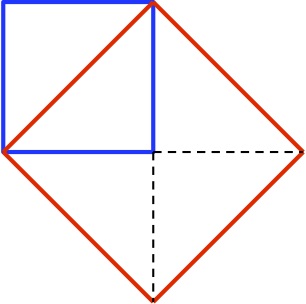 If we assign a “currency value” (written sign) of 1 to the side of the blue square (we would then have to assign a unit to this value, as Liu Hui does with chi), the area of the blue square is 1. What is then the “currency value” on the side of the red square, i.e. the value with which it is possible to carry out an actual transaction (buy a fence for the red square, for example)?

, with which it is possible to chain, in the mathematical universe, other calculations obeying “grammatical” rules of the kind

. However, we cannot carry out transactions in the real world with incomplete procedures. You must end up calculating

Many reflections have occupied philosophers and mathematicians since the Pythagoreans concerning, say, the ontology of Number. What is this Number and, we would be tempted to add, is it typical of humans? This question, in an all-digital era, seems to be a good question. We don’t have an answer (yet), but this short and emblematic reasoning of Liu Hui shows us how we naturally create symbolic forms (procedures, algorithms) to imprison “monsters”, and how these forms become empowered in a syntactically regulated world.

The function of signification attains pure autonomy. The less the linguistic form still aspires to offer a copy, be it direct or indirect, of the world of objects, the less it identifies with the being of this world and the better it accesses its role and its proper meaning.

That is the whole question, for us today, of number: the syntactic game (of the mind, then now of machines) constantly produces new symbolic forms (possibly calculated then written) whose agreement with the sensitive world is no longer guaranteed by mimicry. We grant these forms to our “figures” only afterwards and often by force. So much so that it has become less costly to conform our “figures” (including political and ethical) themselves to the powerful surge of digital forms.

1. ↑ Chemla Karine – Des nombres irrationnels en Chine entre le premier et le troisième siècle – In: Revue d’histoire des sciences, tome 45, n°1, 1992. pp. 135-140. Unless otherwise stated, all quotes are from this article.
2. ↑ An irrational number is a number that does not correspond to any proportion of the form a/b where a and b are whole numbers. The famous number π, which measures the ratio of the circumference of the circle to its diameter, is irrational.
3. ↑ The Nine Chapters on the Mathematical Art is a Chinese mathematics book, composed by several generations of scholars from the 10th–2nd century BCE, its latest stage being from the 2nd century CE. (Wikipedia).
4. ↑ Karine Chemla does not relate in her article what Liu Hui means by “we are not getting through it”. One can imagine that he executed an iterative algorithm of calculation of the square root a certain number of times. But did he really have the certainty that it was impossible “to get through it” (in the sense of a mathematical impossibility) or did he simply want to mean that he did not succeed in overcoming it and that he would postpone the possible further calculation until later?
5. ↑ The rule, implicit in the article, of root multiplication is used by Liu Hui:

6. ↑ The infinity of writing is not inevitable for a rational number. For example, the writing of the number 1/3 is perfectly finished among Babylonians: it is 20 in base 60.
7. ↑ Ernst Cassirer – 1997 – Trois essais sur le symbolique – Œuvres VI

It is in the collective work “Philosophy and calculus of infinity” (in French, published by Maspero), that we find p.45 the following extract, an echo to what was revealed with Liu Hui:

He [Aristotle] sometimes felt […] that the time involved in the composition or the division was not a clear notion – it is even there, still emerging, a fundamental moment of infinitesimal calculus, of the great philosophies which gave it been associated and mathematics in general: if indeed the operation should not be confused with its result, that is to say if the operation is apparently always in power when it comes to the division or the undefined composition for example, we can return the proposition and see that the operation itself can on the contrary be mastered as an operation, therefore (de)finite and infinite at the same time since it then controls a priori an indefinite handling quite distinct from it. Aristotle thus saw […] that the operation must be distinguished from its result, but also from its handling, the latter alone being undefined.

It is therefore to Aristotle’s Physics that we should come back to strengthen the principle of a distinction between procedure (operation, number in power) and written sign (result, number in act). But let’s not forget that this distinction acts in the symbolic and says nothing about the number as it manifests itself, in the form of sensitive figures (shapes), in the real world.