The trader becomes a machine

Trading is kind of game: you can earn money according to the rules of the financial system without the counterpart of a good or a service. These gambling games are legally, if not morally, very well regulated. Indeed, the risks of ruin or fortune being far from zero, they can bring us into intense emotional states, which can overflow into dangerous social behavior with a sometimes dramatic outcome (Madoff, Kerviel, or Iksil “The London Whale” …).

An own-account investor quickly learns that there are no reliable rules in the environment in which he plays. It is therefore a question of obtaining, in this apparently opaque environment, a marginal advantage by the combination of two talents: better knowing the mechanics of the markets than its competitors and getting rid of all emotion. The trader is a disciplined and psychologically interesting individual. He learned to fight against the fear of success, loneliness, burnout, the taste for revenge, stress, greed, etc. He never gets distracted (keep the focus), he constantly obeys his trading system (consistency), etc. By doing everything it can to become a machine, it has become more efficient to replace it with a machine, emotionless, ultra-fast and capable of digesting and correlating thousands of chunks of information every second. In addition, in a zero-sum game, machines are always, sooner or later, more efficient than humans. In the financial system they therefore occupy all the intervals of time where this system remains predictable (of the order of a second).

The trader therefore shows us the way: the machine can replace man in any zero-sum game system where emotion leads to the risk of ruin. More generally, everything that happens in the service sector with digital technology and AI starts first in the world of finance. So, let’s continue with the example of a leading financial company in this area, the “creature” of a finance leader who has become an adept of transcendental meditation … 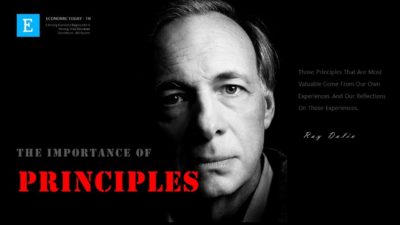 Ray Dalio is the founder of Bridgewater, one of the world’s largest hedge funds. His personal fortune is estimated at 15 billion dollars. He succeeded extraordinarily well in this universe where man tends to be (replaced by) the machine.

Ray Dalio was born in 1949 in Jackson Heights, Queens. He is the only son of a jazz musician father and a stay-at-home mother. At that time, it was a family of the small middle class. He describes himself as a mediocre schoolboy, unattractive to studies and not very good at memorizing. To make pocket money, he caddies on the green at the Harbor Links Golf Club, a stone’s throw from his home in Manhasset, east of Manhattan. He hangs out with Wall Street investor clubs who give him some advice. At the age of twelve, his first investment will be a winner. We imagine the “shock” for a boy of this age. It takes a long time to recover from early success and it will take a long apprenticeship, relentless introspection, to become a winning machine. He will prove to be particularly brilliant in this exercise.

He founded Bridgewater in 1975, at the age of 26, and therefore developed a system of thought, a collection of 200 “principles”, which he finally published in 2011 in a document simply entitled “Principles“1. Reading this book is also highly recommended for those interested in “management mechanization”..

This small advantage provided by an understanding of the economic system and market mechanisms is nurtured to the extreme by Ray Dalio with a frantic, quasi-scientific search for “truth”. You have to look at the system as it is, as a given world from which it is a matter of tirelessly decipher the dynamic laws to survive. You have to be sincere and truthful. Nothing should be hidden, either from yourself or from others:

I learned that I wanted to work with people who really say what they think and who listen to what others are saying, so as to discover the truth […] I learned to love integrity (say what we believe) and to despise his absence.

This is the first condition of a mechanizable company: it must be completely transparent, what Dalio calls “radical transparency“. He therefore set up a system at Bridgewater where all employees are asked to say what they think, to constantly assess each other in writing, to make the recordings of meetings available to everyone … That is to say to “log” constantly the state of the machine, to provide data, as we say now. To be mechanizable, a company must be data-driven and immersed in a culture of more or less radical transparency.

Those who are successful are able to think higher level thinking2. They are able to step back and design a “machine” made up of the right people who do the right things to get what they want. They can control and improve the functioning of their “machine” by comparing what it produces with the objectives sought. Schematically […] it is a feedback loop.

In “Principles”, we thus find the following diagram:

Ray Dalio was old enough to know about the cybernetic movement and the Macy Lectures, but we did not find any evidence of this influence. Bridgewater managers are warned: they are the subsystems of the Dalio’s machine, operating according to the 200 founding principles, and are invited to behave themselves as designers of fully “debuggable” machines thanks to the radical transparency.

Ray Dalio is deeply consistent, like any great leader. Insatiable observer of nature, he declared in 2010 to the Wall Street Journal:

Man will never be able to make a flying object like a mosquito. […] I observe the complexity of nature and I tell myself that man has as much intelligence as the mold that grows on an apple.

Therefore, ethics no longer prohibits considering man as the cog in an efficient machine, at least as long as we cannot do without him.

Sand in the gears

There is, however, a necessary human factor: pain.

Even a seemingly “intelligent” machine has no ability to adapt to a significant context change (unless it has a body or pseudo-body, but that’s another topic). Dalio’s robot trader and machine are impressive, but are only effective at the very moment of their tuning. It’s a form of intelligence that could be called “photographic”. In a dynamic world, you have to know how to understand, change (even Dalio had to reconsider the sacrosanct radical transparency recently), and survive by adapting. Dalio sums this up by the equation3 :

This is the mark of the necessary presence of humans in the machine to manage context changes. In a way, the machine lacks a pain sensor, a “suffering” that motivates the questioning of established programs.

Forward to the future

Ray Dalio hired David Ferrucci, IA Watson project manager at IBM in 2013 to lead the “Systematized Intelligence Lab” at Bridgewater4. This service develops all the applications necessary for gathering and “intelligent” processing of the bulk of data collected in the company, in particular those concerning its management. Some of these apps are installed on employees’ smartphones or iPads and bear suggestive names: “The Contract“, “The Coach” or “Dot Collector“.

The flagship project of this service is the implementation of what Ray Dalio calls “Book of Future” (and sometimes “The One Thing“), which is better known by the more explicit name of “Principles Operating System” (abbreviated PriOS, the name that will be mentioned in the media). It’s about nothing more than putting the 200 principles in the machine, sort of replacing Ray. The first goal is that by 2020, three-quarters of managerial decisions will be made by AI. Ultimately, the role of the remaining humans will be to adjust the decision criteria of the machine, to intervene when “something is wrong”, to think and decide at the meta level.

The path has been laid out

Because the financial system evacuates, by its complexity and ferocity, most of the advantages of being a man, financial services companies (banks, insurance companies, investment companies, financial centers, etc.) have always been at the forefront of “intellectual” mechanization by digital technologies. Psychology, if it has not already done so, has a great interest in studying this borderline domain of finance because it adjoins the psychological territories of tomorrow, those where man will be confronted with the machine, that is, he will be largely replaced by it or he will have to act with it. Traveling on horseback or putting coal in the locomotive gives the same result (going from point A to point B) but the experience is not at all the same.

In 2013, decidedly a pivotal year, the French newspaper Le Monde announced this5 :

Times have changed: the technological revolution has transformed evaluation into a gigantic machine for measuring human activity. IT makes it possible to quantify everything: the time spent on the phone with a customer, the percentage of growth in turnover, the quantity of goods stored on a site, the number of operations carried out on time, or even on time. minute […] “What is new”, sums up the sociologist Vincent de Gaulejac, director of the Social Change Laboratory at Paris-Diderot, “is not evaluation, it is measurement”.

Here are some signs that you are in a company or an environment with a mechanizable management:

The replacement, total or partial, of the manager with artificial intelligence has been officially declared. Is it a fiction? The productivity issues are such that it will happen sooner or later, but not quite as we imagine. Today’s managers, as they are, will not be replaced (at best assisted), as this is simply not possible. These are the companies that will mechanize, starting with the acquisition of tools for the collection and massive analysis of external and internal data, and which, as a result, will make today’s manager ineffective and expensive. It’s not the AI that will become as “smart” as the manager. It is the system that will become sufficiently mechanizable so that only a moderately reasonable intelligence but above all capable of processing large amounts of data can be the agent of effective decision-making.

Ray Dalio’s experience and more generally the psychology of financial actors show us what can happen to management in a digital company. In spite of everything, humans will have the ability to decide during paradigm shifts, over the long term, but this will require them to cultivate an ability to change and adapt themselves. There is a radical issue there and still relatively little noticed.

Finally, let us hope that the manager of tomorrow will not be reduced to a “pain sensor” for the machine. Or, like Ray Dalio, he will really have an interest in practicing transcendental meditation.

Hedge funds whose managers are narcissistic have mediocre, decreasing results, and moreover more volatile. […] It is to limit the egos and the narcissism of its traders and managers that a hedge fund like Bridgewater has decided to implement an organization where the collective takes precedence over individualities.

We have now understood: the “collective” is of course the “machine”. Managers who are too human are “volatile” and have fickle impulses: it is primarily their unpredictability that harms their performance. Their shortcomings are even measured:

Beyond hedge funds, at least one in 25 business leaders is a psychopath. Worrying? Not really: we will soon be able to unmask them thanks to artificial intelligence.