I’m going to China to see better France and its problems.

China has long endorsed the “being” of the digital technician system, which is to serve a society of control and “radical transparency”. It’s neither good nor bad: It Is.

A few months after the end of the 19th Chinese Communist Party Congress, the enthronement of “President for life” Xi Jinping and the unveiling of an artificial intelligence strategy, where does China want to go? What lessons can we learn from it?

In a document published in June 2014, “Planning Outline for the Construction of a Social Credit System (2014-2020)”1, the Chinese State Council sets out its vision of the Socialist Society of tomorrow and proposes to strengthen it with a “Social Credit System” allowing each actor in Chinese society to be rated. The first paragraph of this document is worth quoting in full:

A social credit system is an important component part of the Socialist market economy system and the social governance system. It is founded on laws, regulations, standards and charters, it is based on a complete network covering the credit records of members of society and credit infrastructure, it is supported by the lawful application of credit information and a credit services system, its inherent requirements are establishing the idea of an sincerity culture, and carrying forward sincerity and traditional virtues, it uses encouragement to keep trust and constraints against breaking trust as incentive mechanisms, and its objective is raising the honest mentality and credit levels of the entire society.

Concretely, it involves deploying a national big data allowing to grant a “social score” or “credit rank” to citizens according to their record of behavior. This project, which is due to be completed in 2020, is already well advanced2 :

This reform already seems to have started to be applied in 2017, since the Chinese judicial authorities announced at the beginning of that year that 6 million Chinese had been banned from flying due to bad social conduct.

However, we must avoid making simplistic judgments. China is of course in search of its own power but at the same time has to face, particularly because of its huge population, strong tensions and internal contradictions. In addition, acceptable social norms change as living standards rise:

[…] the social consciousness of sincerity and credit levels tend to be low, and a social atmosphere in which agreements are honored and trust are honestly kept has not yet been shaped, especially grave production safety accidents, […] food and drug security incidents happen from time to time, commercial swindles, production and sales of counterfeit products, tax evasion, fraudulent financial claims […]

Not to mention pollution … China is probably the only country in the world that so much needs, regardless of ideology, a powerful and transparent social regulation system.

The State Council then lists in long pages each entity of the Chinese social apparatus, each part of the administrative and economic system, addresses each actor in society to involve it in the implementation of this social credit system which must reward virtuous behavior and punish anti-social behavior. Here are some extracts from the passage concerning internet:

Forcefully move forward the construction of online sincerity […] progressively implement the online real-name system. […] Establish online credit evaluation systems […] evaluate the credit of the operational behaviour of Internet enterprises and the online behaviour of netizens, and record their credit rank […] Establish online credit black list systems […] adopt measures against subjects listed on black lists including limitation of online conduct and barring sectoral access, and report them to corresponding departments for publication and exposure.

The “credit rank” is therefore only the tip of a vast iceberg of control and regulation, of which we know the existence but of which we can still hardly imagine the depth and the consistency with, in particular, an extensive network of local and national data and technology companies in symbiotic cooperation with the government.

In terms of ethics, the principle of social ranking is not bothered by the sometimes “convoluted” considerations of Anglo-Saxon philosophy (From the infosphere to a gaseous ethics or Being Stuart Russell – The comeback of Moral Philosophy). However, it remains to elaborate the thinking of this social “cash register” and its societal implications. 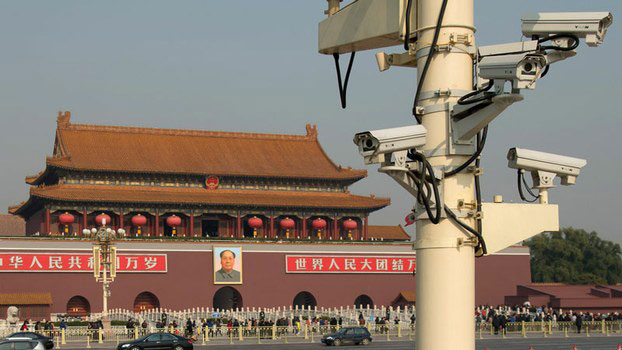 Finally, let’s recall that China already has 170 million surveillance cameras and that number will quadruple by 20204. Of course, after big data, these gigantic national orders for hardware and software for facial recognition benefit Chinese companies whose expertise is incomparable. A know-how that is exported and begins to feed, as you can imagine, geopolitical tensions:

On November 12, the Wall Street Journal echoed growing reluctance in the United States, where there is concern that Beijing could use flaws in this equipment, either accidental or intentional (the cameras of Hikvision are used both by police in Memphis, Tennessee, and at a military base in Missouri). In fact, the General Service Administration, last year, removed the company from its list of approved suppliers to equip government agencies and services.

The success of Chinese technologies abroad is of course based first of all on massive return on experience on their own territory.

China’s strategy is set out in a new document from the State Council of China released in July 2017 titled “New Generation of Artificial Intelligence Development Plan”5. It echoes the American plan released in 2016 by the Obama Administration6. There is nothing really surprising in China’s strategy, the principle of which is quite identical to that of the American strategy (what else to say?) But its form is … Chinese. Here are some salient aspects.

First, absolutely all the actors of Chinese society are on board, all things, all artefacts, all economic processes are summoned to become “intelligent”. This is how China must become the world leader in artificial intelligence. More precisely, AI is a fundamental means to strengthen China’s leadership on the world stage. Especially since China is perceived as having reached a dangerously “normal” level, a situation where the strong catch-up momentum has disappeared (we underline these so oriental expressions):

Second, like the Social Credit System, AI is immediately perceived as a complete means, vertical and horizontal, of control and therefore of social stability:

Artificial intelligence technology can accurately perceive, forecast, early warn the major trends of infrastructure and social security operation, timely grasp the change of group awareness and psychology, respond actively decision-making, significantly improve the ability and level of social governance, and it is indispensable for the effective maintenance of social stability.

Third, the objectives are planned and all the actors are oriented towards respecting the plan and its deadlines, while recalling its adequacy to certain pillars of Chinese strategy in general (in particular, the “four comprehensive” of Xi Jinping, not explicitly cited but omnipresent). We will not detail here these stages, already widely commented7. One of the most interesting goals is one that no Westerner would dare to enact. Based on the premise, that the “original theory” (understand “American”) of AI is based on “weak theoretical foundations” (what we also more or less think).

By 2025, we shall achieve a major breakthrough in artificial intelligence basic theory.

Fourth, this overall plan is perfectly coherent and quite profound. Its military stakes are never far from the more lyrical remarks:

We shall build an artificial intelligence society for the development of the world’s science and technology, for the improvement of people’s livelihood and welfare in the society and for the implementation of the ideology of people-centered development; we shall enhance the national defense strength of artificial intelligence to protect and safeguard national security.

These few passages give the general tone. There is no doubt that China will apply its AI plan (also concerning very real objects: polar robots, intelligent orchards, etc.), as it is rolling out its Social Credit System and its surveillance cameras without hesitation. Expect to face the best applied AI technology in the world, because first deployed without any hesitation on an interior stage of 1.3 billion people.

Having no purpose, being fundamentally neutral (just being, one could say), the Technological System is a-political, a-moral, a-ethical …

On the other hand, it perfectly serves the socio-political standards of today’s China.

From France, we can consider that social ranking, mass surveillance and, tomorrow, the enhancement of all controlling systems by artificial intelligence constitute a veritable political and social nightmare. But who would have predicted, fifteen years earlier, that we would agree to share our personal information, to constantly disclose our geographic location, to make massive purchases on the internet, to share our measurements etc.? In other words, like in the famous boiling frog experiment, the vision of China can gradually become an accepted standard (then necessary?).

This is why we must stop considering digital and AI as the simple economic means of a “Startup Nation”. It is to an urgent reflection concerning our own project of society that we are summoned. These technologies, far from being forces of homogenization and globalization, on the contrary exacerbate cultural differences. For the great powers, they constitute the tools of true domination, not economic but socio-political. From this point of view, the question of “ethical standards” is at stake in a battle whose ferocity we have barely seen yet.

In this battle, Europe, for lack of political and social homogeneity, and which would allow to engage a “power strategy”, remains today a digital colony. Entangled in an overly simplistic culture of “data protection”, failing to face publicly the question of the implications of digital for surveillance, etc. Europe struggles to break out of her contradictions and her reservations. No strong digital player can escape these ambiguities and, above all, no “decolonization” is in sight.